As usual, Mouse has been itching to get away from it all for a while and have an adventure so last week he managed to escape for a couple of days and took a trip to Scotland.  It was quite a short flight to Inverness airport and Mouse was soon at his hotel and unpacking his suitcase.

The first job is always to test the bed and Mouse was very impressed that in this particular hotel he had a choice of pillows. 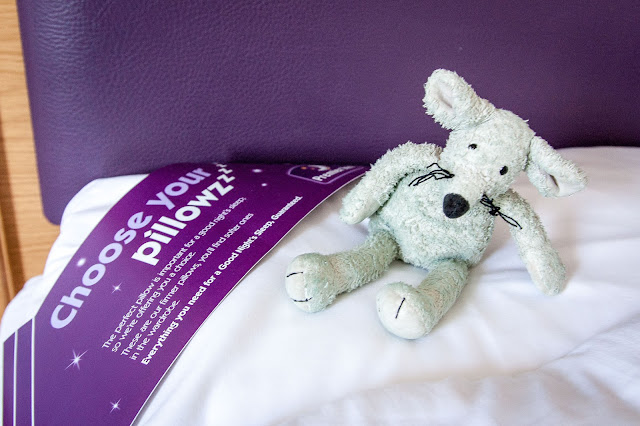 Once he was unpacked and rested for a few minutes it was time to study the tourist information leaflets and decide where to visit. 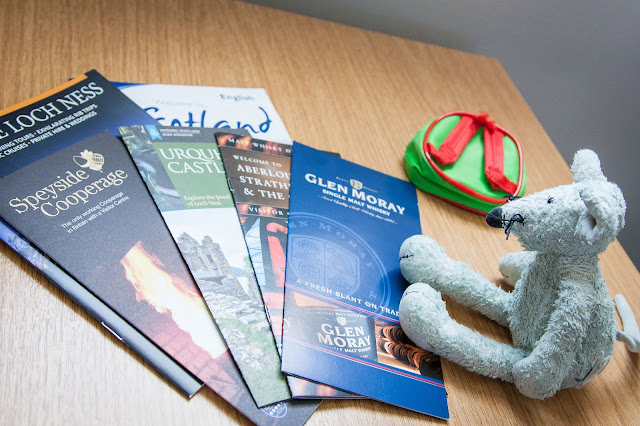 As he was in the heart of Whisky country, mouse thought he would visit the famous Glen Moray distillery first.  It was an amazing place and the smell was fantastic. 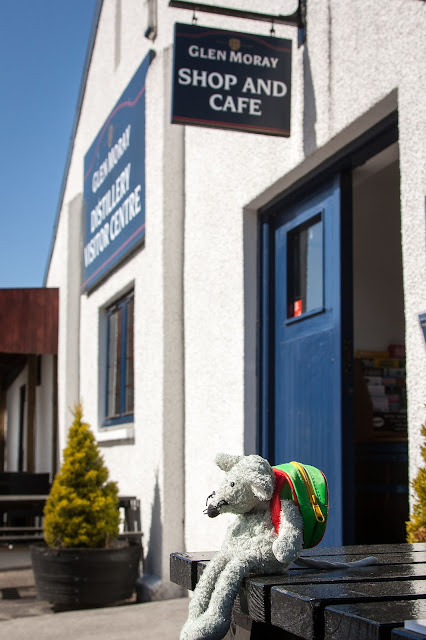 However Mouse was on a tight schedule and couldn't stay for long.  Mouse just loves the seaside so he couldn't resist a quick stop at Lossiemouth for some fresh sea air. 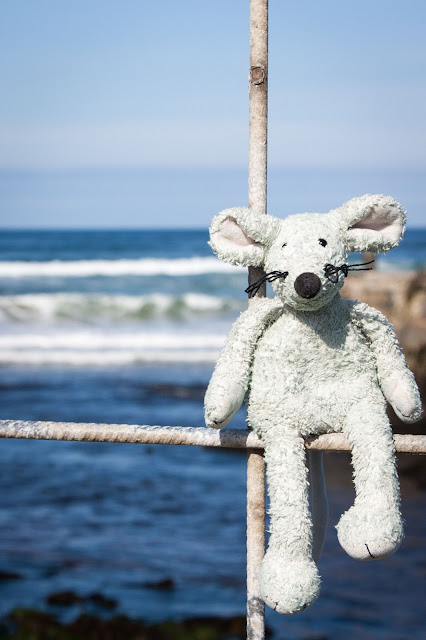 Mouse's favourite thing to do at the seaside is look for wildlife in rock pools so off he went to see what he could find. 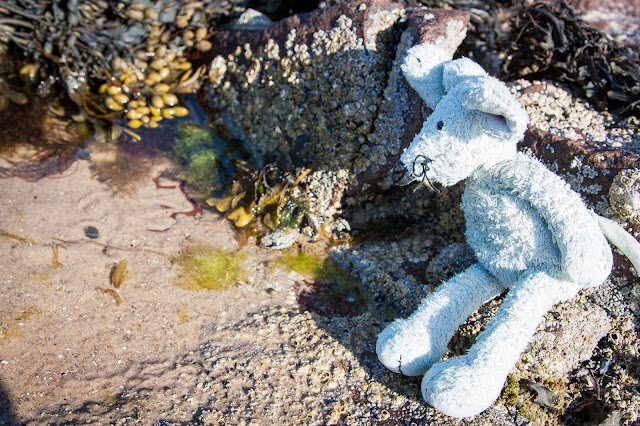 The haul was a bit disappointing in the first pool so he went in for a closer look. 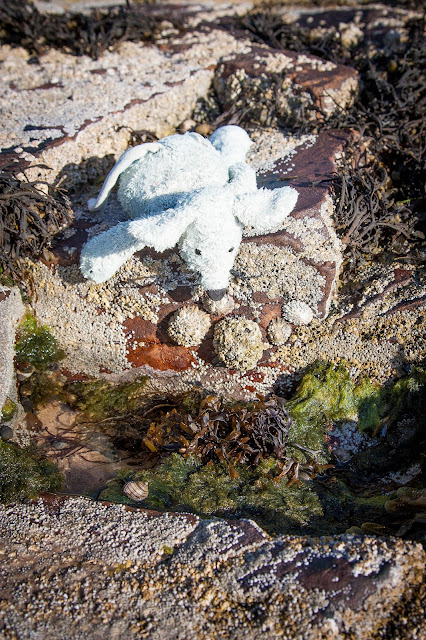 When he was on his way to the seaside, Mouse had seen a sign for a castle so he decided that would be his next stop. 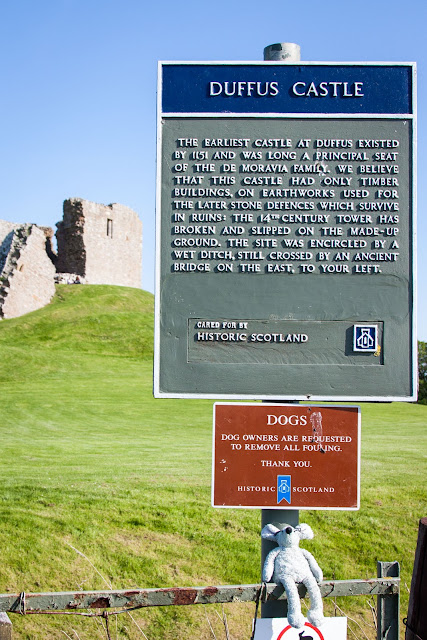 Mouse was amazed that the castle had been here in some form since 1151AD, that really is old.  The sun was starting to get lower in the sky and it seemed a perfect time a place to sit for a while and consider life. 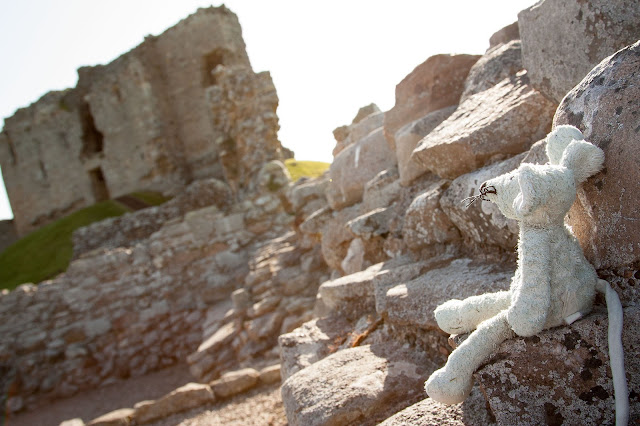 However, the peace and quiet didn't last for long as Mouse was disturbed by the loudest noise he had ever heard.  It was a kind of rumbling that got louder and louder until it was so loud mouse thought the sky was falling down.
Mouse was relieved to discover that it was just a Fighter Jet from the nearby RAF Lossiemouth base that was practising landing.  Mouse jumped in the car to see if he could get a closer look and surpisingly, he managed to park right at the end of the runway to get a superb view. 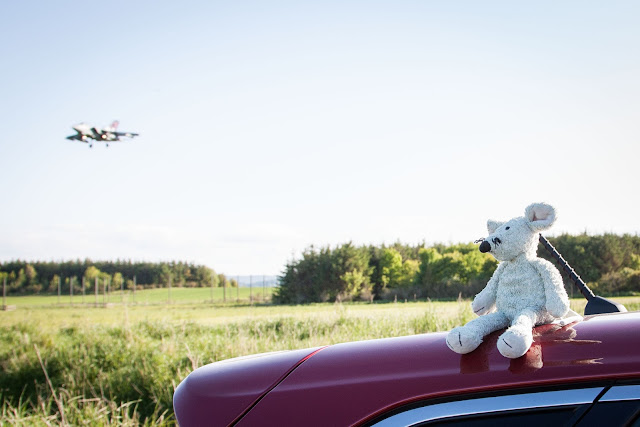 Mouse sat for quite a long time watching the planes coming and going.  In fact it got so late that he almost forgot that he needed to get back to his hotel in time for dinner before going to bed.  Thankfully, he just made it in time and had a slap up meal before calling it a night.

The next morning mouse had a few hours to spare before having to catch his flight home so he decided to head to the world famous Loch Ness to see if he could find Nessie, The Loch Ness Monster.

Mouse was amazed at the size of the loch, it seemed to go on for ever.  What he was even more surprised about was the weather.  Sunshine and still water is quite a rarity this far north. 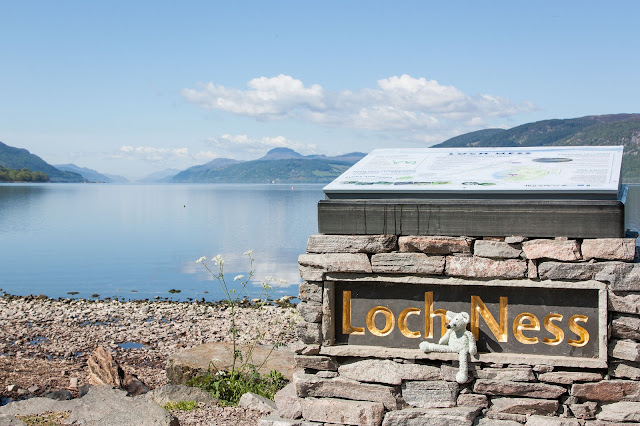 Mouse had heard about a man called Steve Feltham who had given up his job, girlfriend, house and everything in 1991 to take up the search for Nessie on a full time basis and live on the shore of Loch Ness.  Perhaps today would be the day, and Mouse could help Steve in his search...........Alas, Steve wasn't home and must have been out already continuing his tireless search. 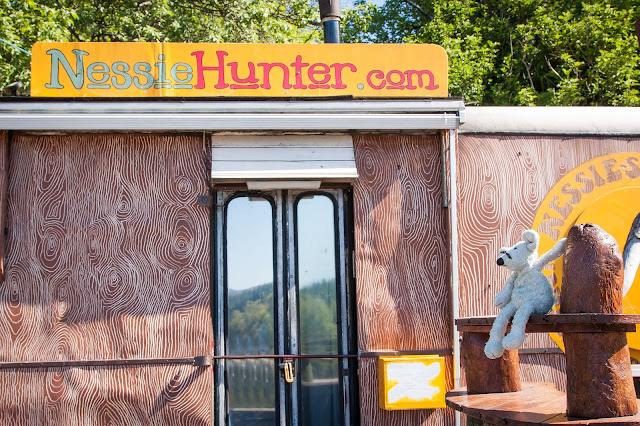 Unfortunately Mouse's time had run out and he needed to get back to the airport to catch his flight home but he has vowed that one day he will return and look again for Nessie.

Mouse will be back soon for another adventure.  If you don't want to miss any of Mouse's updates then please subscribe Here to receive his adventures by e-mail as soon as they are posted.

Welcome back to the second part of Mouse's adventure in Cornwall.

The next place on Mouse's list to visit was St Michaels Mount.  This is a very special place that is an island during high tide but at low tide it can be reached via a causeway.

And there is a castle on top of it too! 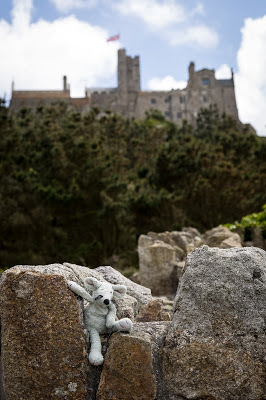 It was a great walk over to the island but Mouse was relieved to see an amphibious vehicle just in case the tide came in quicker than expected.  Mice really aren't good swimmers you see. 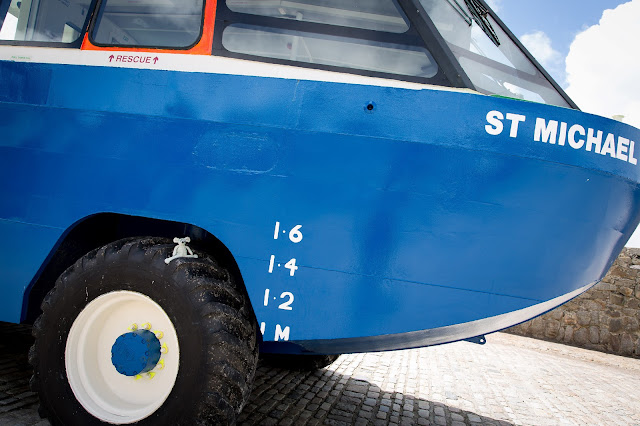 After spending a while on the island, Mouse was feeling peckish.  There is nothing better than an authentic Cornish Pasty to keep hunger in check. 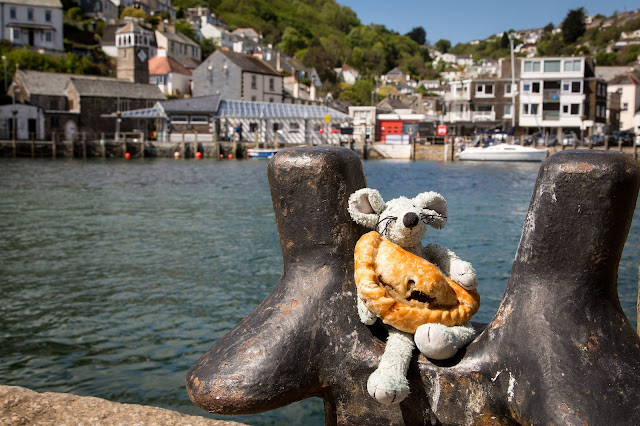 After the Cornish Pasty, Mouse was very thirsty and whilst he was immersing himself in the local culture he thought it would be best to visit a Cyder Farm to quench his thirst. 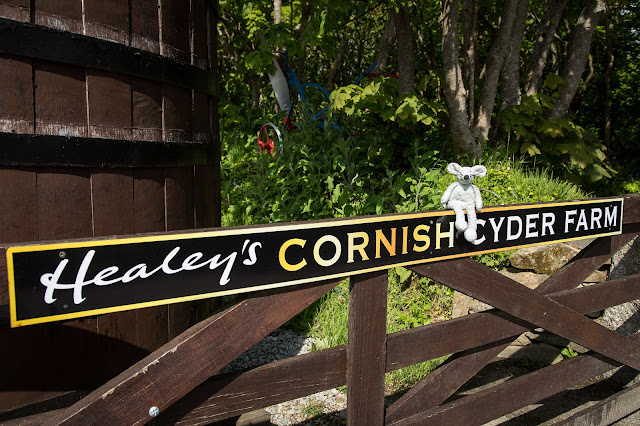 Mouse had a great time wandering through the orchards and seeing how the traditional Cyder is made.  Luckily he bumped into his best mate Peanut Rabbit so they found a nice shady spot to enjoy some lovely Scrumpy Cyder. 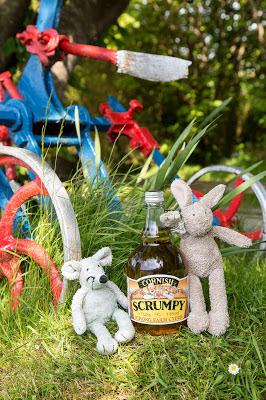 Mouse and Peanut had a wonderful afternoon and it was soon time to retire for the evening.

Mouse awoke with a bit of a headache the next morning.  That Cyder sure has a kick to it!  So the best thing he could think to clear his head was to go for a surf in the fresh air at Newquay's famous Fistral Beach. 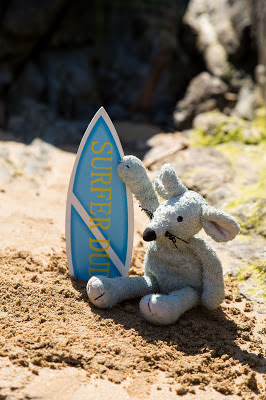 After the surfing, the last thing on Mouse's "To Do" list was a spot of crab fishing.

It didn't take long and he was pulling lots of crabs out one after another. 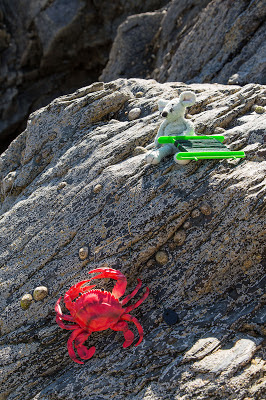 Crab's can be tricky to handle though as Mouse soon found out. 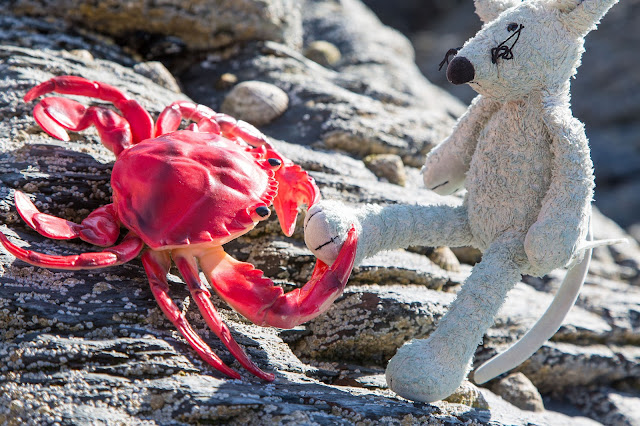 Mouse thoroughly enjoyed his time in Cornwall and is busy planning his next adventure.  Drop in again soon to find out what he is up to.


It was half term holidays from school last week so Mouse decided to make the most of his free time and head for Cornwall in the UK for a well earned rest.

Every visitor to Cornwall has to go to Lands End and Mouse is no exception. 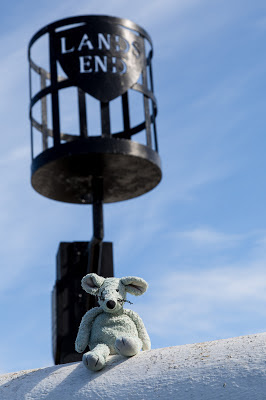 It was very windy as you would expect from a place at the corner of the country but Mouse was brave enough to risk standing on the edge of the cliff for a picture with the famous signpost.  Although he was too busy looking at how far his home is to smile for the camera. 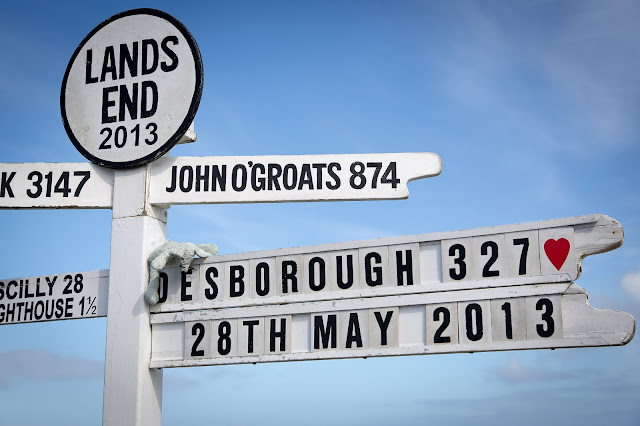 He also found another suitable spot to pose in a less risky position. 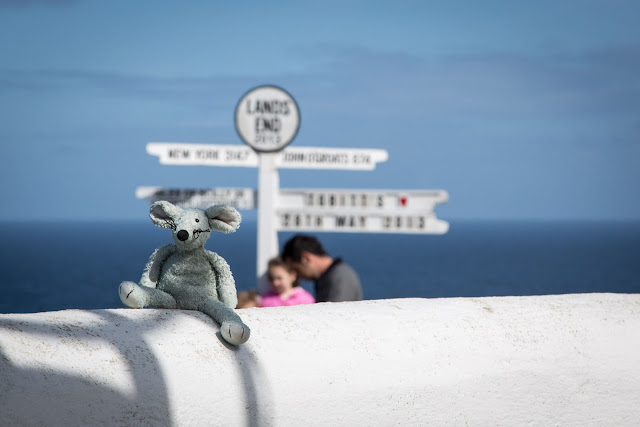 While he was at Lands End, Mouse saw a brave person arrive on a bicycle who had ridden all the way from John O Groats in Scotland.  The famous Lands End to John O Groats journey.  This inspired Mouse and he vowed one day that he and his best mate Peanut Rabbit would complete this adventure and earn their place in The Club. 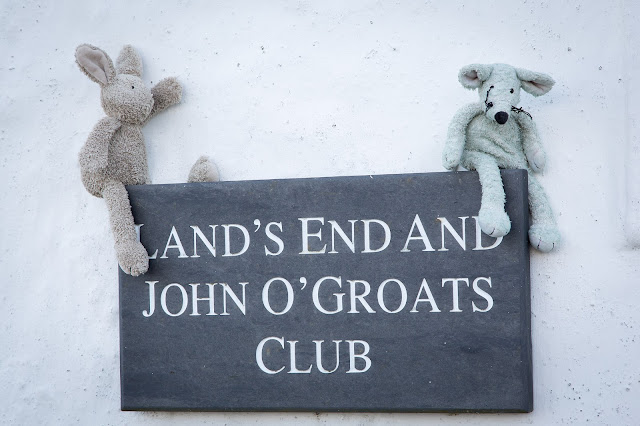 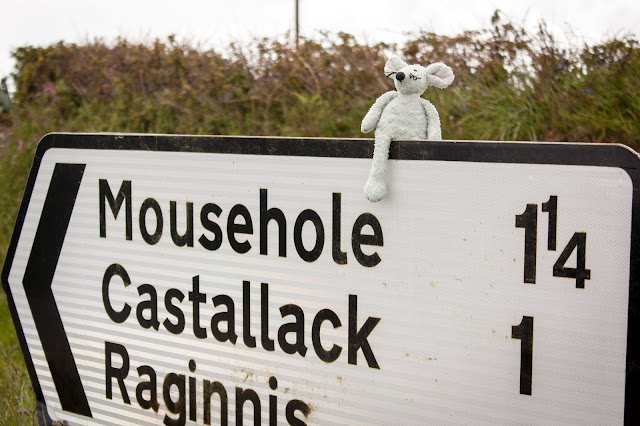 Mouse was in his element amongst so many Mousey things. 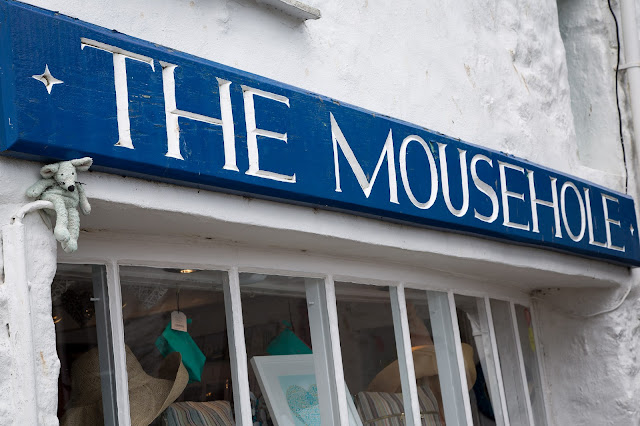 Even the boats had awesome names. 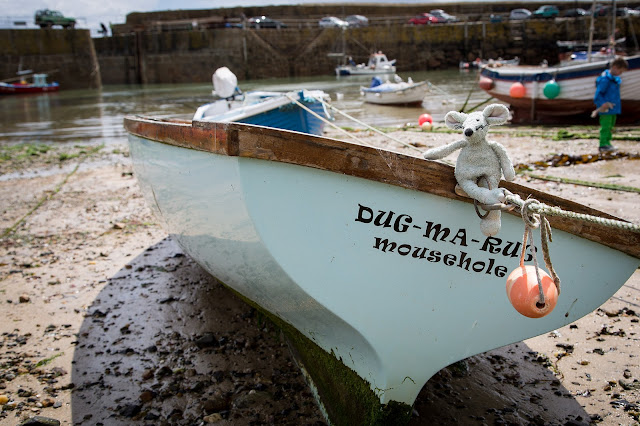 It is a tradition in the UK that whenever you visit the seaside, you just have to have fish and chips by the sea so Mouse thought that there would be no better place than Mousehole. 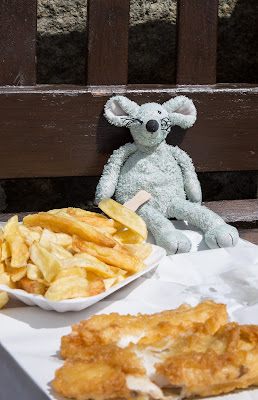 Mouse carried on exploring to walk off his lunch and stopped for a rest in a handy place.  For some reason, while he was resting he had a sudden urge to try a Cornish Cream Tea. 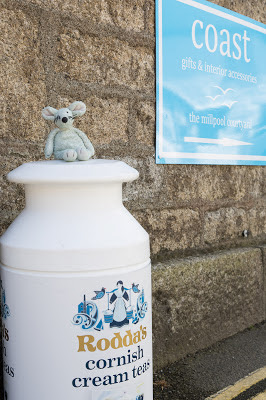 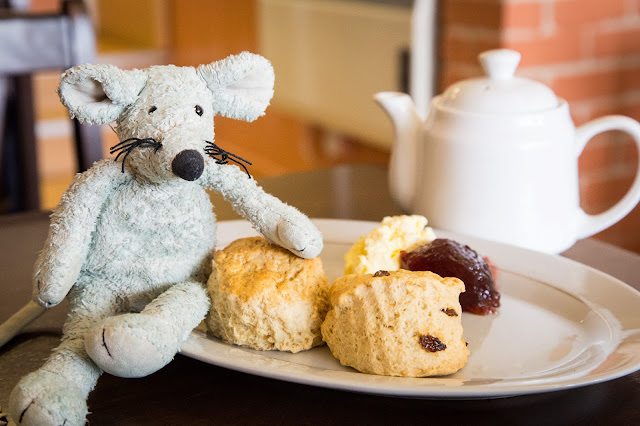 Eating the scones without getting in a mess was a bit tricky. 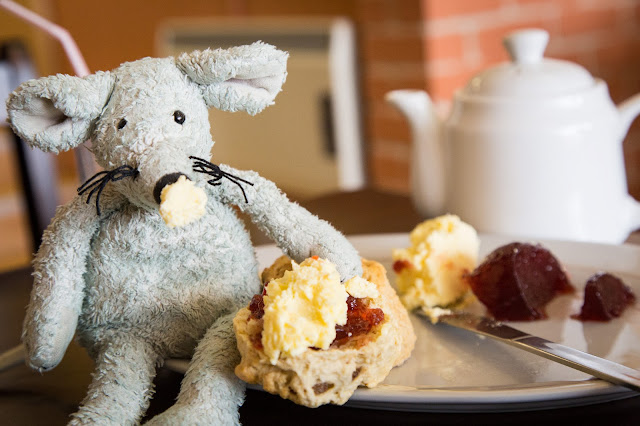 Mouse really enjoyed his trip to Lands End and Mousehole but had been so busy that he was shattered and needed a sleep.  He went back to his hotel for a rest and to plan what he could get up to next.

Part 2 of Mouse's trip to Cornwall is coming soon.
Posted by Steve Webb at 10:17 No comments: